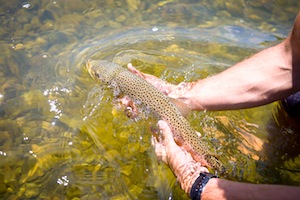 Why Montana TU is Concerned:Tintina Resources proposes operating the Black Butte Copper Mine in a high-risk acid-producing orebody next to Sheep Creek, one of the most important suppliers of cold, clean water and trout spawning habitat to the Smith River. This proposal creates a long list of concerns:

1. Tintina Rsources is a small startup Canadian company that has never operated a mine.

2. The locals hired by the company to make promises to Montanans are employees, not decision makers. They are not on Tintina’s board of directors or investors, and have little control over important decisions such as investment in environmental protections, community involvement or important employee safeguards.

3. The President and CEO is an Australian, the rest of the board is comprised of a Canadian, Australian and two New Yorkers. They have never done business in Montana.

4. Once the mine starts operating, an Australian mine company, Sandfire Resources, states that it will be the sole owner and operator of the project, leaving Montanans out of the project.

5. The mine will require large-scale pumping of groundwater that could dry up crucial tributaries, harm resident trout and reduce spawning habitat for Smith River fish in Sheep Creek and nearby waters.

6. The mine poses high potential for producing acidic pollution, as well as discharges that include heavy metals and minerals. Groundwater discharged to keep the mine dry will include arsenic in concentrations exceeding those protective of human-health standards.

7. Tintina’s front people are telling Montanans that this is going to be short term mine with an 11-year life. However, the company’s recent report to investors talks up the potential for creating a large, landscape-transforming mining district, expanding as far as 17 miles away and lasting 50 years.

8. Montanans have heard Tintina’s story many times over. Mining companies come in boasting about being responsible and employing new technologies, and yet the results are almost always the same: pollution and taxpayer-funded cleanups.

Be heard: Contact Montana Governor Steve Bullock at governor@mt.gov and the Director of Environmental Quality, Tom Livers at tlivers@mt.gov