The View from the Kitchen by Chef Linda Foy

The Colors of Spring

en grey and brown burst into a vivid paint wheel of fluorescent hues. The scent of lilac wafts through the air, mingling with the aroma of newly spread fertilizer. Calves lounge in the greening grass, newly-returned sandhill cranes leap in the fields, and baby waterfowl drift behind their parents in the rivers.

It is the time for wild foraging.

Asparagus start to appear on the banks of the rivers and…in places that locals do not seem willing to talk about.

My first spring in Twin Bridges in 1993, I was told that asparagus “was everywhere” but no one deemed me trustworthy enough to tell me where to start to look. (I was from California after all.)  It took me quite a few years to find it but now I’ve got the eye. Usually I find that someone has been there before me, and that’s ok, it’s the hunt that makes it worth the while. Like they say, “it’s called fishing, not catching.” 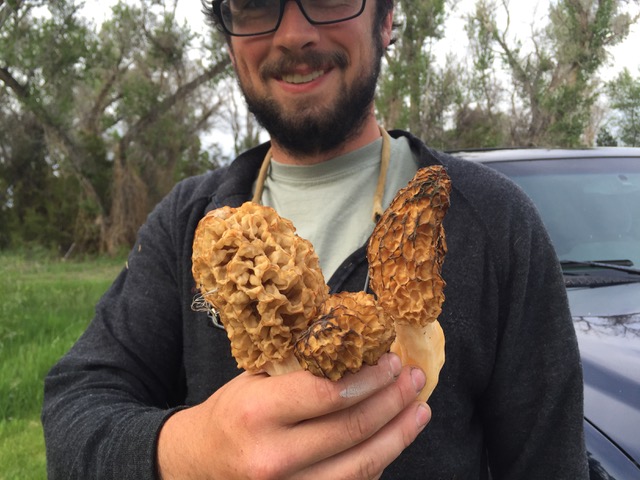 Morels sprout up along rivers and in post-burn areas. These locations are guarded with a zeal that makes the asparagus intelligence cartel look like amateurs.

Looking for rhubarb, horseradish, lilacs, and hops sprouting where old homesteads used to be can be a fun diversion while floating or wade fishing.

Healing Waters Lodge has a flourishing rhubarb plant behind the old barn on the property.

Rhubarb leaves are poisonous, but their stalks are great for everything from desserts to savory chutneys and compotes.

But, some of the best colors of spring belong to the bugs inhabiting our rivers. Little yellow sallies, the rarer-seen little pink stonefly and the big king of them all: Pteronarcys californica. A perfect Montana day: salmonflies, morels, and trout.