Fly Fishing in the Time of Covid-19 Tennessee Williams, in his play Night of the Iguana, broke down life into two levels: the Realistic and the Fantastic. Make no mistake for better or for worse, in 2020 we are living in the realm of the Fantastic. We are extremely lucky and grateful that we escaped the […]

Continue reading "Fly Fishing in the Time of Covid-19" » 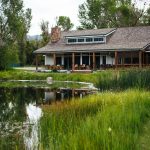 The View from the Kitchen by Chef Linda Foy The Colors of Spring Spring in southwest Montana. The season when grey and brown burst into a vivid paint wheel of fluorescent hues. The scent of lilac wafts through the air, mingling with the aroma of newly spread fertilizer. Calves lounge in the greening grass, newly-returned […]

Continue reading "The Colors of Spring In Southwest Montana" »

Orvis announced the winners of their 2020 Orvis-Endorsed Awards. Healing Waters Lodge won the 2020 Endorsed Fly-Fishing Lodge of the Year. Read all about it: https://news.orvis.com/fly-fishing/meet-the-winners-of-the-2020-orvis-endorsed-awards Thank you Orvis!  We are thrilled for the recognition of the hard work and dedication that our fly fishing guides and hospitality staff bring to our guests at Healing […]

Healing Waters Lodge was the runner up for the 2019 Orvis Endorsed Fly-Fishing Lodge of the Year. We were thrilled for the Orvis recognition and validation that our guests appreciate our efforts in providing them with the best hospitality, clean accommodations, great food, and exceptional fly fishing guides and fly fishing opportunities in southwest […]

Great Deal for Fish Like a Guide, But, Live Like a Client: Fly Fishing School: Think of it as immersion therapy into the world of fly fishing, any skill level can be accommodated, from beginners to technical fly fishers.  $3350 per person includes 6 nights lodging, all meals at the lodge, 5 days combination (brief) […]

Healing Waters Lodge presents: Fish Like a Guide, But, Live Like a Client 2020 Fly Fishing Schools April 26 through May 1:  Considered Graduate school for anglers with more experience with the emphasis of honing your skills. Think of it as immersion therapy. $3350 per person includes six nights and five days lodging, all meals, […]

Fly Fishing Predictions in 2020 and Beyond We will have average to above average snowpack providing Montana’s Rivers and Trout a healthy supply of water for 2020. Here is this weeks forecast from a group called Arctic Oscillation and Polar Vortex Forecasts: This week the predicted pattern across North American is troughing/negative pressure/geopotenial height anomalies […]